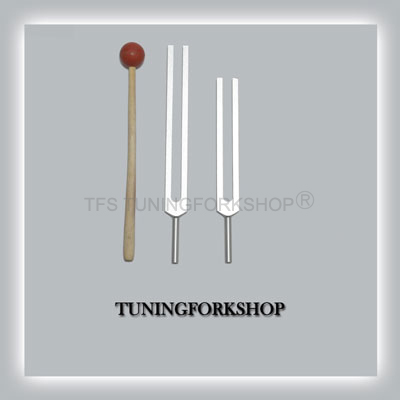 C & G Tuning forks for Sound Therapy. These are high quality machine made tuning forks which are excellent for sound healing and not moulded tuning forks. Free shipping.

The C & G Tunersare 2 Tuning Forks. They are based on the Pythagorean or Just Scale, also known as Whole Body Tuners. They create the special interval in music and sound therapies called the Perfect Fifth. In India, this Fifth is believed to create a sound through which Shiva calls Shakti to the Dance of Life. In Polarity Therapy, this star is the physical body in motion and the motion of subtle energy inside the physical body. It is also believed that this is the sound that, the Greek Sun God of Music and Healing, namely Apollo, plucked on his sacred lyre. He did this in order to beckon dolphin messengers to Delphi. Lao Tzu referred to this interval as the sound of Universal Harmony, balancing the forces of Yin & Yang.

It is strongly recommended that if one is starting to enter the amazing world of Tuners, begin with these ones.

These 2 Tuning forks are based on :